August 08, 1964. Fifty years ago from today, a beautiful young lady and handsome young man started their life together as husband and wife here in Denmark. 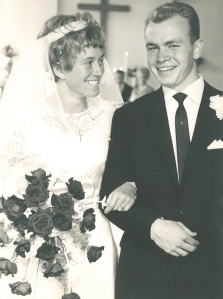 Their story started when both of them joined the athletics club called Saga in Copenhagen. Nanette and Tage were both on their teens when they first met. Nanette became the Danish Champion in long jump category and Tage became the Danish Champion in 100 meter dash. As both of them are champions in Athletics,their engagement was then featured in a newspaper. Since then they start running together and became running buddies for the rest of their lives.

Nanette on her long jump days

A lot of things happened. They moved around places due to work where in they met a lot of people and made friends. Friends that after all those years they remain good friends. After 6 moves, they are now happily settled down in a small town called Humlum, west part of Denmark. They love leaving here because they are situated nearby a fjord where they go for their run everyday…uhmmm ok its only Nanette who is running everyday now:-) while Tage walks with Laban their dog every morning.

They just got engaged!

They were lucky to have 2 children named Klaus and Thomas, both now have their own family. Klaus is married to Tina whom they have 3 kids named Camilla now 17, Helene now 13 and Nikolaj now 11. Thomas is my husband and we have Martin who just turned 2 years old last June and he got another two girls from his first marriage named Hannah and Emily both 7 1/2 years old now.

Klaus and Thomas at early age

50 years of marriage is a milestone we all be proud of. Yes, they had ups and downs during those long years, they agree and disagree on some things, they had all the tests they can have on their marriage life but they survive. They are here today enjoying their lives to the fullest, loving every moment of being a grandparents and treasuring all the good things every single day. 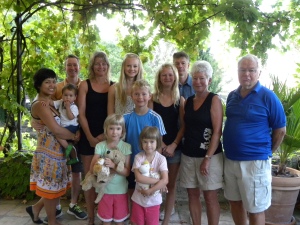 Tage and Nanette with the whole family in 2013

I myself, being a daughter-in-law of Nanette and Tage is very proud of them. Being a part of this big celebration is one of a kind experience. I can only do my share by shouting to the whole world a huge congratulations to both of them.

One perfect day for a nice and quiet walk by the beach in Weymouth beach in the UK before we left for a month holiday in Denmark. Look who is having fun… 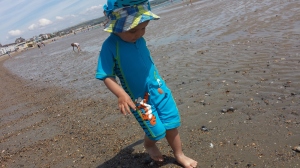 Footprints in the sand

At a very young age, he is getting all the attention from the beautiful ladies…but I don’t know if he noticed them at all.

Today our little man turns 2. He is growing fast but I still remember that special day when he came into our lives 2 years ago. Our precious one became the center of our attention for the past 2 years and we are enjoying every bit of it.

Thank you for being such a cute and sweet little boy you are. You have your moments especially with mommy…but still you’re the best. I just wish you start eating more so the stress during dinner time will be over:-) 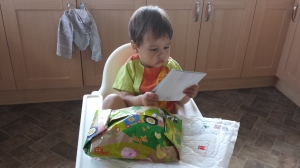 Busy reading a card from grandparents

You love to read your books, to play in the garden all day rain or shine if you have to, you love playing mom’s pots and pans as drum set. What I love the most are your cuddles and sweet kisses always ready to share to mommy and daddy.

A simple celebration with his toddler group

We both enjoyed your birthday despite daddy being away from home. We will celebrate your birthday with all our friends on Sunday.

Happy 2nd Birthday Martin. I LOVE YOU TO THE MOON AND BACK!